Thank you for making it this far! 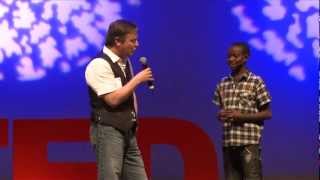 Thank you for making it this far!

In an instant, life is created and set in motion. In a flash, dreams take shape and planning begins. In those long seconds between anticipation and certainty, often your world can feel as if it poised to crumble around you or ready to bloom into something deep and rich with meaning. Ultimately, both are absent from your control.

I still can remember the voice I heard in my head sitting on the back patio of my mother's home. I was watching our boys doing what they do best, playing with their buddies and creating these grand adventures amidst the trees and bushes that line the back of the yard I grew up in. I can vividly remember the feeling of peace and comfort I felt as I heard a voice say, “There will be more.” Melissa and I had always talked about the possibility of adoption later in life but Tevin was less than a year old! More was the last thing we were thinking of, but still, I had peace.

It wasn’t long until Melissa took the four pregnancy tests and confirmed what we both had assumed. As an aside, those damn things are expensive and don’t come in packs of four! They should, everyone I have ever spoken to doesn’t trust the first two and so they must of course pee on a third. Well now the package is open and if she needs a future pregnancy test, you can’t trust the first one so we should just get triple confirmation, absolutely.

We had gone down this road together twice before, but neither experience was so obviously dominated by fear and shock.

As Melissa’s hands began to shake she became overwhelmed with the gravity of life. Although I was ecstatic, I quickly realized that my dreams had taken flight while she sat grounded in the planning and practicality of how our life would change.

The week to follow was consumed with emotion, stress and tension. Melissa began to celebrate the life that she new grew inside her but those emotions were co-mingled with the fear of what lay ahead. We were still trying to navigate the adventure with our 8 month old, Tevin.

Our marriage was strained. As usual, I couldn’t understand why she wasn’t able to unabashedly celebrate the miracle of life the way I did. All of our conversations with people had to include a partial focus on the negative and it drove me crazy. The more persistent I was to focus on the positive, the more she felt attacked. Then as the weeks moved on, we began to come together around the joy of our new family and the realities of the growing pains in this journey.

I only remember the silence and the sound of a single heartbeat. My heartbeat as it pounded in my chest and my ears when the ultrasound showed the black and white image of the fetus and nothing but silence. Even now as I sit here writing, I am not sure if my heart is responding to the memory of that day, or what was to come.

April 24th 2009, that was the due date they gave us when we started the appointment. One day before my 33 birthday. Cool! What a story we will have of life at 32.

What a story. In seconds, our attention was redirected from the baby that wasn’t to be to the health and vitality of Melissa. If we didn’t plan or control this then, we HAD to trust those who could. But all of those things would fail in their control.

It took almost 7 weeks for Melissa’s body to go through the miscarriage. The medications only partially worked. After 3 weeks she needed and emergency D&C to remove remnant placenta. She bled and ran the risk of hemorrhage throughout those 7 weeks and the physical discomfort and complications were the easy part.

The erratic levels of hormone surges left her quickly spiraling into a chemical/clinical depression. Our two boys desperately needed their mom to resume “life as usual”

and Keenan would inquire daily as to “where mommies smile went". All the while in her heart, Melissa was punishing herself with guilt and grief over her initial reaction to the pregnancy. There are times when rational thought cannot emerge until emotional expression concludes.

I was emotionally crippled. I told myself, “I had to be”. We were in crisis and I could not afford to fully engage my pain, anger and frustration because someone has to get life to move on. Stay rational, my emotions weren’t helpful to anyone. So there, I set camp. Paralyzed by the sense of loss that we experienced and insecure about my ability to “fix” what happened to us and to her.

As she emoted, I rationalized. As she grieved, I listened. As she found solace in simple spaces of time, I occupied my time with work, the boys and with life.

“Alone and Disconnected.” Those were the words we used to describe our existence, to and with each other. Many nights I laid awake next to her as she cried from sadness or from the frustration of all the physical complications. I would rub her back, stroke her hair and be still hoping that she would know I was there for her.

I would celebrate the good days and the triumphs with her as she began to regain energy and strength. All the while she would tell me that she felt alone because I wouldn’t let her in to where I was. So we kept talking and kept loving and one day after Christmas we felt like us again.

I often think that this experience has had a longer lasting effect on me. I have been confused by the voice I heard and the peace I felt knowing there was more to come, yet that more wasn’t then. I am still paralyzed by the thought of going through it again, challenged by the fear of the process outweighing the reward.

To be honest, Liss got her smile back. When she has her smile, our family shines!

The Due date is in just a couple of days and Melissa wants to do something to symbolize closure. When she initially brought it up, and in subsequent discussion since then, I find my self becoming withdrawn. I know I am still coping, but I just wasn’t convinced that this was going to solve anything. Until I was sitting in the sauna after an 11:30 p.m. workout.

As I paged through my playlist, I was eager to cue up my “cool-down” music. 33 songs hand selected from the library to get me to relax and just enjoy the textures of the music. Three songs into the list I hear the intro to a song I have heard dozens of times but tonight I listened to it. Here are the word to the Chorus;

This is what it means to be held.

How it feels when the sacred is torn from your life

This is what it is to be loved.

And to know that the promise was

When everything fell we’d be held.

That was it! Held. Natalie Grants word spoke directly to my faith, my marriage, my life. As all things crumbled around us, we fought to be in control.

When a child is hurt, the first thing they look for is someone to hold them. It brings a feeling of safety and reestablishes a sense of control within the environment. When my boys want to snuggle or hang out watching a game, you will find them on my lap or on my chest with my arms tightly wrapped around both shoulders. I engulf them and I love it. Most of the time one or both of us are so relaxed we fall asleep.

Conversely, you take the same position and add resistance or tension, a continuos play for control and it is called wrestling.

Men hate the idea of being held and scarsely admit to the need for personal touch. We feel that in some way it is weak and feminine to say that we need to be embraced. To be held, is more than that. It is the ability to collapse into a strength greater than your own knowing that your are surrounded and consumed with security, affirmation, love, and hope.

During this season I know that God has wanted me to find rest in his embrace. I didn’t mean to but I’ve resisted. Thus, we’ve wrestled. Likewise the closure and healing that Melissa and I seek is not in the rationalization of the why. I can’t justify my fear of the process with experience, insight or a promise of better things to come.

On April 24th the only closure we can find is to celebrate that we survived. We can celebrate the fulfillment of the Promise. We can and will embrace, engage and move on together.